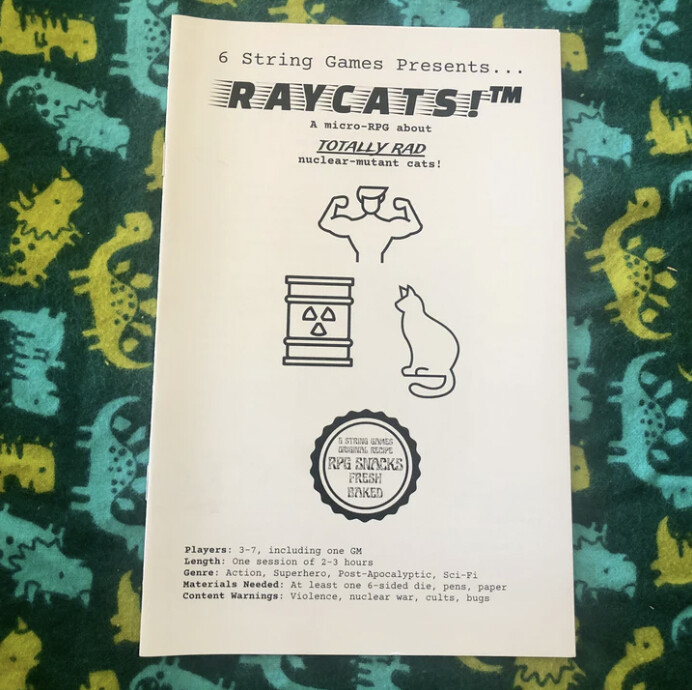 RAYCATS™ is a single-session TTRPG about swole, sexy, humanoid cats who guard the mysterious RAD ZONE and protect what's left of life on Earth. Inspired by Teenage Mutant Ninja Turtles, Thundercats, Power Rangers, and a bit of Mad Max, this simple game (based on John Harper's Lasers and Feelings) takes minutes to pick up and has all the mechanics and story prompts you need to have a raucous few hours of campy, Saturday morning cartoon fun.

In 1981, the Human Interference Task Force was formed to develop methods of warning Humans in the future of buried radioactive waste. This method had to transcend language, culture, and millennia of Human stupidity. As it happened, the methods proposed also transcended all reason and good sense. One particularly batshit proposal was to breed a species of housecat that would change color when exposed to radiation - “raycats.”

The Fiction - as told by RAYCATS™

The Elders speak of the Before Times, when we were still small, cute creatures that lived with Humans, snuggling them and clawing their furniture. Our color-changing fur warned Humans when they were near high radiation, saving countless lives. But then one day, claxons blared. The skies turned sickly green. The Humans dropped their bombs and blew themselvs to near-extinction, and the World Desert was born in fire.

Now, several feline generations later, most of the Humans are gone. The few that remain have bodies warped by radiation and minds tainted by nihilism.

As for us? All that radiation gave us a glow-up.

We are the RAYCATS™—swole, sexy, and dressed to the nines. We’ve morphed into fearsome felines and guardians of Planet Earth... or what’s left of it.

The Elders say it’s our duty to guard the RAD ZONE. They say what’s buried there is dangerous to all Life, and that we are never to tread there. We’ve obeyed so far and done our duty. But who knows? desperate times may one day call for desperate measures...

A Threat is going to want something found only at the very heart of RAD ZONE. Your team of RAYCATS™, which has guarded the RAD ZONE for centuries, must stop the Threat from getting it at all costs.

The Players take on the roles of the RAYCATS™ as they explore the forbidden RAD ZONE. The Game Master (GM) will create the storyline, describe the scenes, play the part of any non-Player characters (NPCs), decide when Players roll, and create consequences for the Players’ actions. Everyone works together to drive the story toward a satisfying conclusion.